When shopping for fresh turkey, make sure it is among the last items selected so that the length of time it is without refrigeration is as short as possible. This will help reduce the growth of harmful bacteria on the turkey between the time when it is purchased and when it is placed in the refrigerator at home. If the turkey is without refrigeration for more than an hour, because of the travel time from the market, a cooler with ice should be used to transport it, and any other perishable items, for the duration of the travel time. This is also true with frozen turkey as it may begin to thaw if it is away from the freezer compartment for more than an hour.

Avoid purchasing a fresh turkey that has been placed too high in an open refrigeration case in a food store. The temperature of the turkey may not be low enough to prevent the rapid growth of harmful bacteria. Any temperature between 40°F and 140°F is considered unsafe for storing turkey. If a frozen turkey is purchased, it should be placed in the home freezer compartment as soon as possible.

It is important to follow the basic rules of cleanliness when preparing turkey. Work surfaces, dishes, and utensils should be washed thoroughly with soap and hot water after using them. Bleach can be used as a disinfectant for cutting boards and other work surfaces or an antibacterial spray may be used. When taste testing food, do not use the same utensil that was used during preparation and be sure that a clean spoon or fork is used for each taste to eliminate the spread of germs. Beware of kitchen washcloths and towels that have been used on multiple surfaces because they can spread germs. Use paper towels or other disposable cloths whenever possible.

The following points should be considered to reduce the risk of cross contamination when preparing turkey:

Foodborne illness, resulting from turkey that has been improperly handled or undercooked, may not have a similar effect on everyone. Young children, the elderly, and people with chronic illnesses are the most susceptible to foodborne illnesses. The bacteria that cause the illness may not make a person sick until several days after eating the affected food and by that time the illness is usually thought of as being the result of some other cause.

The following points should be considered to reduce the risk of contamination when thawing turkey:

The following points should be considered to reduce the risk of contamination when stuffing turkey: 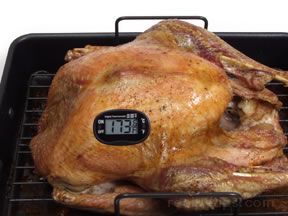 The internal temperature of the breast
meat should be a minimum of 170°F.

Some cooks have the mistaken idea that time can be saved by partially roasting a turkey and placing it back into the refrigerator so that less time will be required for roasting on the day the meal will be served. This is a dangerous practice, which encourages harmful bacteria to multiply at a very rapid rate, resulting in food poisoning. Once begun, the cooking process should be allowed to continue until the turkey is cooked to the proper internal temperature.

A meat thermometer should be used to determine the correct doneness. When the interior of the breast meat reaches 170°F and the interior of the thigh reaches 180°F, the turkey is properly cooked. When the meat is pierced with a fork, the juices will run clear. Some whole turkeys are sold with pop-up timers that indicate when the turkey is fully cooked, but a meat thermometer is still the most reliable tool for determining the proper doneness. If the turkey is done cooking before you are ready to serve it, it is safe to keep it in a 200°F oven for a short period. It is best to cover the turkey with aluminum foil during the holding period to keep it from drying out.

The meat near the bones of a turkey (or any poultry) may still look a bit pink even if a meat thermometer indicates that the turkey is fully cooked. This is because younger turkeys have bones that are more porous than older turkeys, which allows red pigment to leach out from the bones to the nearby meat during the cooking process. The turkey is safe to eat as long as the internal temperature of the breast meat has reached 170°F or higher and the thigh meat is 180°F or higher and the juices run clear.

The type of method used for cooking turkey may also pose a danger if it is not properly performed. Deep-frying is becoming a popular method for cooking whole turkeys, but extreme care is necessary to ensure safety. Because the required equipment can be cumbersome and the large quantity of hot oil necessary for cooking a whole bird can be dangerous, deep-frying a whole turkey is much less safe than deep-frying food on a smaller scale. It is important to note that Underwriters Laboratories has refused to certify any turkey deep-frying equipment because of the dangers involved. Listed below are some important points to consider when deep-frying turkey:

A fresh whole turkey or fresh turkey parts may be stored in the refrigerator at 33°F to 40°F for 1 or 2 days before cooking. It is best to place turkey products in the coldest part of the refrigerator, which is usually the meat drawer or the bottom shelf.

Make sure any juices from raw turkey do not come in contact with any other food items. Packaged raw turkey parts can be placed on a plate in the refrigerator to ensure that none of the juices drip onto any other food items. A whole fresh turkey should be left in the original packaging until it is ready to cook. It can also be placed on a tray or in a pan in the refrigerator in case there are punctures or tears in the packaging.

If fresh turkey needs to be stored longer than 1 or 2 days, it must be frozen; otherwise, it may begin to spoil in the refrigerator before it is scheduled to be roasted. A whole fresh turkey should be left in its original wrapper and may be stored for 6 months in the freezer compartment if the temperature is at 0°F or lower. If the original wrapping is torn or punctured, the turkey should be rewrapped in heavy-duty freezer paper or aluminum foil. Raw turkey parts should be rewrapped with freezer paper or aluminum foil and may be stored in the freezer for up to 3 months. Turkey parts do not keep as long as a whole turkey because there is more surface area exposed to bacteria.

If fresh turkey is improperly stored in the freezer it may become discolored and dehydrated. This is known as freezer burn. Exposure to the cold, dry air of the freezer compartment can cause moisture loss, especially if the turkey is packaged incorrectly and/or stored in the freezer for an excessive length of time. It is best to leave whole fresh turkeys in the original packaging unless it is torn. Turkey parts should be removed from the original wrapping and rewrapped before placing them in the freezer for long-term storage. A layer of plastic wrap followed by a layer of heavy-duty aluminum foil works well as protection against freezer burn. Heavy white freezer paper is another alternative for protecting the meat. It is important to note that freezing fresh turkey may affect the flavor, texture, and appearance of the meat if it is stored too long in the freezer.

A turkey that was flash frozen by the processor, may be stored in the home freezer and safely prepared up to 3 years after the original freeze date, however storing it for longer than a year may result in reduced quality when the bird is prepared, but it will still be safe to eat. The possibility of freezer burn could affect the moistness, flavor, and texture of the turkey. Turkey that is flash frozen by the processor will have little difference in quality compared to fresh turkey because commercial freezing is a much faster process than home freezing, resulting in turkey that retains most of its original quality.

Leftover cooked turkey meat must be removed from the bones as soon as possible after the meal and refrigerated promptly. Wings and legs may be refrigerated without removing the meat from the bones, but any remaining meat on the body must be removed especially if the turkey has been stuffed. Any leftover meat that has been in contact with the stuffing should be discarded if it is not used within a day or two. If the leftover turkey is to be frozen, then all of the bones should be removed, including the wing and leg bones.

Cooked turkey should not be kept away from refrigeration longer than 2 hours after cooking. Cooked food left at room temperature for more than two hours should be discarded. Temperatures between 40°F and 140°F allow bacteria to grow rapidly, which means that hot foods should be kept hot (above 140°F) and cold foods should be kept cold (below 40 °F). Cooked turkey that is properly refrigerated should be used within 3 or 4 days. If this is not possible, the leftover turkey may be tightly wrapped in freezer paper or aluminum foil and placed in the freezer where it may be kept for 3 to 4 months.

Listed below are additional tips that should be considered when storing turkey:

Cutting Up a Whole Turkey 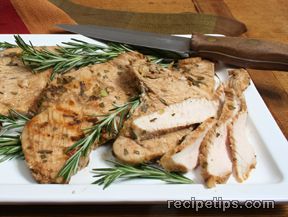 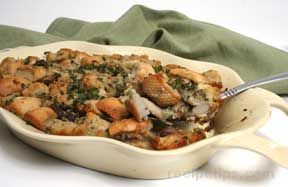